Everyone loves Back to the Future, so it stands to reason that everyone loves the Delorean.  It’s a car that bridges the gap between car people and regular people.  It’s a car that is iconic, beautifully wonderful really SLOW.  I have always dreamed of owning one as a collectors car, but I don’t think I would enjoy the driving experience.  That said, I also think it would be a nightmare to modify and maintain simply due to the level of custom made parts that would be required…after all, this is no WRX.  Furthermore, in real life, I’m of two minds when it comes to building a fast, capable Delorean.  On one hand, it needs big ups in power, grip and handling in order to backup it’s legendary status.  On the other hand, there is something unsettling about big mods on such an iconic car…almost as if the parts required would be a molestation to the brand.

Fortunately, in Forza 4 there is no stigma to building a serious Delorean!  This example has nearly 500 horsepower and revs to almost 8000 rpm.  It’s cagtoo and stripped but still uses the factory gear ratios albeit with a limited slip diff.  I thought that the old school Work wheels fit the car pretty well.  They are super 80’s but the deep dish is aggressive and I painted them gray to match the factory bumpers a bit.

Without any suspension or differential tuning, it’s actually a pretty impressive drive.  midrange big midrange punch but its still controllable unlike a ZR1.  Actually, I think this has the makings for a very cool drift car in Forza. 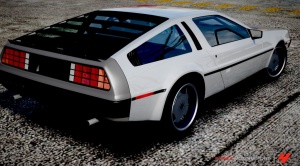 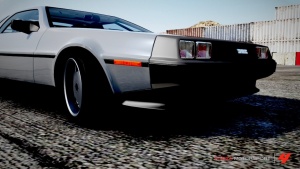 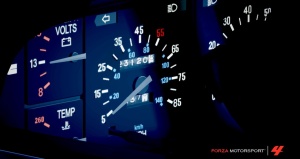 The Mitsubishi Colt is lame.  I know it, you know it…hell, Mitsubishi HAS to know it by now.  But, there is still hope.  Remember when the Nissan Juke was lame?  Now the Juke is cool (link below) and it has been for a while.  What if Mitsubishi tried the same thing with the Colt?

If I were a big muckity-muck at Mitsubishi, I would comission a project car to compete with the vision for the Juke GTR; codename “crazypants.”  On paper, it seems fairly straightforward.  We’d slap a fully built version of Mitsubishi’s Evo motor/AWD setup into a Colt.  Perhaps for the sake of nostalgia, I’d go with the ‘ol tried-and-true 4G63 instead of the new Mivec lump…regardless, the car would have a large aftermarket turbo, a big FMIC, fat injectors, a large fuel pump and a programmable ECU.  Sounds simple enough right?

My virtual-example in Forza 4 has over 700 horsepower.  Yes, 700.  Why?  Remember the ’90’s?  The Japanese car makers love to one-up another and we know how easy it is to turn the wick up on a GTR powerplant.  There, 700hp explained.  So far, it runs the 1/4 mile in just a tick over nine seconds in the game.  I’d love to see this happen in real life…it just might inject a bit of much needed interest into the Mitsubishi brand! 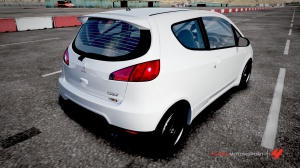 One of my favorite things about Forza 4 is how accurately you can create virtual copies of famous tuner-cars and test drive them.  Here, I have recreated Fujita Engineering’s (more commonly called FEED) RX8.

Thankfully, the Forza game had the FEED body kit in the game as well as the wheels FEED had once used.  With a bit of research (otherwise known as watching best motoring vids on YouTube) you can find the modifications, power level, suspension settings and tire sizes which can be used in the game to simulate the tuner’s work.

FEED’s RX8 was a jack of all trades on a track.  It needed a bit more power than FEED used in the best motoring battles so I tweaked it to just over 300hp (about 50 more than the real car) and keanti naturally aspirated setup.  In racing, the car revs like crazy and has a super flat torqueband like a real NA rotary.  It corners tightly, grips hard and it very neutral. For a car rated as a B500 in e game, it’s pretty impressive! 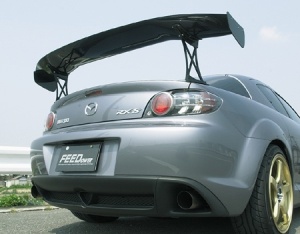 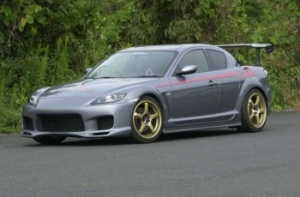 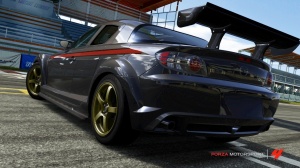 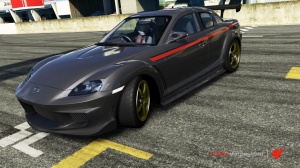 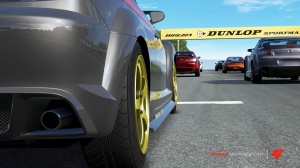 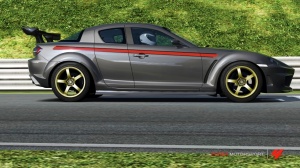 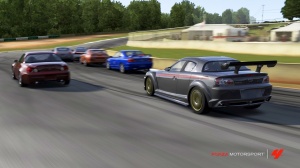 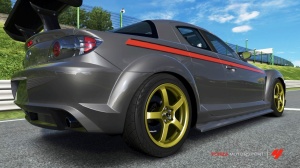 I took a few pics of the seriously sexy Nismo 380RS in Gran Turismo 5 today.  I had a decent race on the Special Stage R5 night course, a classic GT original track. 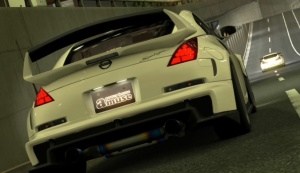 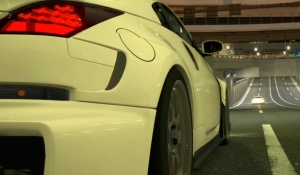 No, the FC RX-7 isn’t a leaderboard car, and mine won’t run anywhere close to the top times.  That said, I still love this car.  The FC is light, balanced and the stock rotary motor revs like crazy and has a nice flat torqueband useful for powering out of corners without excessive shifting.

This one is built for Class A use and is stripped out, caged and has race tires and about 340hp.  If I had the means, this would be my dream car to build in real life for track use.

This is just a fun project car…an FD RX-7 Powered Miata.  The combination of the Miata being so light to begin with AND the wide powerband of the 13B rotary motor makes this a joy to play around with.

I like to tweak this car and put it head-to-head with my supercharged Lotus Exige as they are pretty similar kinds of projects.  I’ll post a comparison soon…

I am not what you’d call a “people person.”  At work, I am generally a quiet contributor.  While the office is typically buzzing with the usual chatter ranging from TV shows, gossip and assorted personal issues, I am usually absorbed in my work.  I am more comfortable as an observer and it keeps me free of distraction so I can concentrate on more important things (like pivot tables hehe).

When I sit down to play a racing game, it is usually the same story…I race alone.  Every so often I’ll join an online race, but I usually get annoyed by anyone who insists on using their headset just as easily as the guy who has to purposely crash into everyone.  So, I race alone.  In Forza 4, I’m usually playing in test-drive mode (where I can tune while driving) or doing hot laps.  The goal is to go lap after lap, trying to beat my best time.  After about 5 laps I can usually get into a nice groove.  Soon after, lap times get very consistent and I’ll start chasing tenths of a second here or there using my ghost as a competitor.  I’ll try to out brake my ghost, or carry more speed through a corner or try a different line all in order to post my best possible time.

The other day, I was trying to post my best time with an A600 rated NSX on the Maple Valley course (a favorite of mine).  I had a couple of NSX’s in my garage and I tried 2 of them with different tuning philosophies.  I chose the older 1992 NSX-R as my lightweight/lower power car and a 1995 NSX-R as my more powerful albeit heavier car.  Again, the goal was to see which car could go faster with the same class A rating.

The tune for each car ended up being very similar with slight differences in roll-bar and spring settings for each car.  I assumed I would go faster in the light car as I could outbrake the heavier car and try to carry more speed through each corner (since Maple Valley is a fairly high speed course).  In the end, I was almost 2 seconds faster with the heavier car.  The ’95 felt more composed and a bit easier to drive despite it being 500 pounds heavier.  So,  I’ll go back to the ’92 car and make some changes for next time!

According to the leaderboards online, I am ranked within the top 5% on this course with an A-Class car (out of nearly 600,000 players).  However, the leading lap times with similar cars (NSX GT) are over TEN SECONDS faster!!  Crazy!!  Back to the drawing board…

I think it’s safe to say that if you’re reading this, you’ve tried to recreate a number of your own real-life cars in games like Gran Turismo and Forza.  We’ve all been there…we wonder how our own cars with similar setups would handle around some famous tracks like Laguna Seca or the famed Nurburgring.

The real-life car I keep coming back to in my virtual Forza garage is my old FC RX-7.  It was a base model 1988 “SE” that was essentially the lightest trim of the year.  I bought it when I was 17 back in 1997 during my senior year of high school and kept it until 2005.  In that time, it underwent several stages of modification.

When it was sold, I had swapped in a street ported Turbo II motor with all of the typical supporting mods on a stock turbo such as a turboback exhaust, fuel pump, larger injectors and a GReddy front mount intercooler.  The car was estimated to make around 280-300 wheel horsepower and it was pretty quick considering the relatively light weight.  I had light solid bucket seats, a non-power steering rack and removed the air-conditioning to save additional weight so it should have been in the 2400-2500lb range.

Thankfully, these are ALL things I can recreate in Forza!  I used the same mods, the same front spoiler and even similar wheels!  I found an old alignment spec sheet and copied them right into the game too.  Take a look at the real-life phots compared to the Forza “build.”  I’ll work on getting a few good videos up as well…